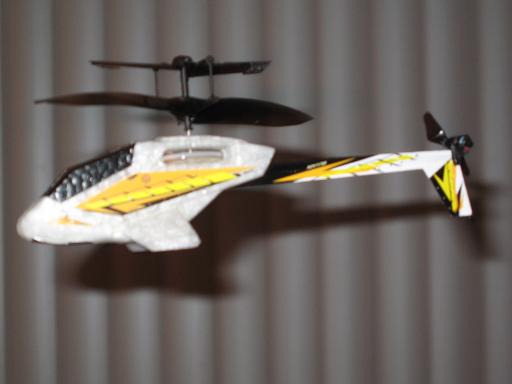 I have to admit that when I first powered up the Picco Z and tried getting it to fly, I was disappointed. But I knew that I had to give it more than 10 seconds before I passed summary judgement. That turned out to be a good decision on my part as I grew to really enjoy the challenge of flying the Picco. Read on the for the rest of my review.

My Picco Z came with just a bit of charge in its Li-Poly rechargeable battery, which meant that I was able to stick some AA batteries into the remote control and start flying. My initial thought was wondering why it was spinning around without moving forward. Once I actually read the instructions, I found out that it needed trimming. Not being much of an aircraft enthusiast, I had no idea what this really meant, but essentially, you need to balance the aircraft so that it’s in equilibrium during flight.

After a while, I was able to control the Picco with very small steady movements to the controls. This was the hardest and most challenging part of learning to fly the helicopter. In fact, this is what I feel makes this a toy that you won’t quickly become bored with, at least assuming you don’t give up easily! Some vital stats: flies for about 6 to 10 minutes on a charge which takes about 15 to 20 minutes; the charger is actually the controller which needs 6 AA batteries; comes with a spare rear rotor in case you tear up the original; too light to be flown in windy conditions. 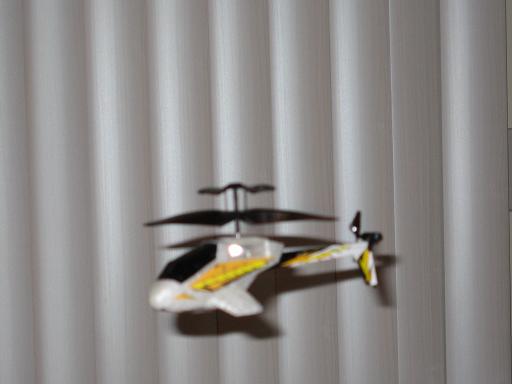 You’ve probably read between the lines and figured out that I was not very good at flying my copter, at least in the beginning. Too true. So true in fact, that I crashed it many times – into the roof, into walls, into my furniture, the floor. The great thing about the Picco was that I was able to right it, and start flying again, pretty much immediately. The lightweight design (10g) with plastic and styrofoam materials meant that it could take an impact without much, if any, damage. Included in the review are some pics I snapped while my Picco was up in the air and stable (click on them for larger versions). I was quite amazed myself that my camera was able to take such a good picture, without showing any blade movement.

For less than $40, this is a very cool RC toy. It has been tremendously popular with almost 1 million units sold in Europe and Japan this year. In the States, stores like Radio Shack and Toys “R” Us have run out of inventory. You can still pick one up at HobbyTron. [If you order by Dec 31, 2006, you can get $5 off with this coupon code: HTPZC] The Picco Z, also seen in some places as the Picoo Z, comes in 3 different colors. Each colored version actually corresponds to a different frequency that the controller/helicopter operates at, so you could get all 3 and fly them together. You can also snag all 3 for a reduced price at HobbyTron.

By the way, due to the popularity of the Picco Z, you can find a ton of material on the Web about them, including guides to trimming, forums and even mods.