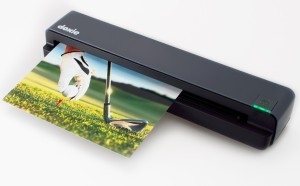 I love the Doxie One. Paperless nirvana, here I come. I’ve dreamed of a paperless and more importantly, an electronic document repository, for a long time, but that has been mostly a dream as I’ve dreaded having to haul my papers over to my clunky all-in-one printer-scanner, then scan papers 1 or a few at a time.

I’ve used the Doxie One for the past 4 weeks and with a few exceptions that I’ll talk about, I love it. If your goal is to go paperless and stay that way, I can highly recommend the Doxie One as an essential component of your paperless toolbox.

The Doxie One comes in a minimal of packaging (no blister packs thankfully), with a power adapter, a USB cable, 2 GB SD card, and a cleaning and calibration kit. Apparent took a page from the Apple playbook and minimized the number of features and buttons to only the essential. In this case of this product, that works perfectly.

Kudos also to Apparent for not wasting money and materials on including a CD, but instead pointing users to where they can download the latest and greatest version. They also did a nice job on the quick start guide – bright graphics with a minimal of words, but again, works well for this product.

Apparent Corp released their latest model to their Doxie line of personal scanners, the Doxie One (~ $150) late last year, the other models being the slightly cheaper Doxie U that’s geared to students and teachers (~ $120), the original Doxie (~ $150) and the top-of-the-line Doxie Go (~ $200). I’ll cover some of the differences later.

The Doxie One is a svelte 10.5″ long, 2.2″ wide, 1.7″ tall and weighs less than 1 lb (take a look at the photo for an idea of its size). For power, you can either plug in the power adapter or throw in 4 Ni-MH AAA batteries. This is one of those features where the Doxie wins over my printer – portability. 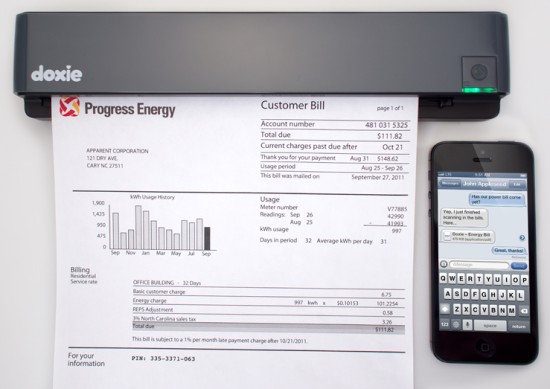 Scanning is a simple matter of inserting your pages one at a time face up into the scanner. It grabs it and scans it at 300 DPI (dots per inch). That is the maximum resolution that it scans at, and while I initially thought this was a serious limitation, after scanning in a number of documents, I didn’t feel that I was lacking any detail on those copies. The other 2 Doxie models also let you scan at 600 DPI.

The most challenging aspect of using the Doxie was inserting the papers in evenly. I found myself wishing on more than one occasion that there was a physical guide that would make it near impossible for me to screw up lining up the page. However, even if you’re off by a few degrees like I was a lot, if your page has typical margins, you’ll still capture what’s there; it’ll just look a little skewed. While this may not bother some people, I couldn’t stand it! Perhaps when I get tired of scanning in 100s of pages, I’ll change my tune.

One quirk I found that turned out to be a hidden feature if you will was with legal paper. While looking through the product comparison page on the Doxie website, it says the Doxie One can’t handle legal-sized paper (8.5″ x 14″), but I figured it was wide enough, why not? Sure enough, I had no problem scanning those in and then importing them in via the application.

As I mentioned, one of the big selling points of the Doxie is its portability. Imagine the scenario where you have boxes and filing cabinets worth of documents to scan in and all you have is a flatbed scanner either by itself or built into your all-in-one printer. Well you would need to take documents over in bunches to your printer and scan them in or worse yet, take the printer or scanner over to the filing cabinet while probably needing to maintain a connection to a computer to store the scanned docs.

In my case, I know that using my printer means scanning one or a few pages at a time, then immediately ‘processing’ that scan on my computer using the scanner application (choosing the resolution, file format, where to save the file, etc.). What I feel Doxie does to great effect is decouple the physical scanning from the electronic processing. You can scan in hundreds of pages today, and process them another day.

Speaking of portability and thinking about doing away with wires too, wouldn’t it be nice if you didn’t have to pull move the SD card over to your computer or to plug the Doxie in? Oh but you can – just plug in an Eye-Fi WiFi SD card. That’s an SD card with built-in 802.11 wireless networking that may be configured to automatically upload files to your target of choosing. Just imagine pointing it directly to your computer with your Doxie app!

Although Apparent only sells a Wi-Fi combo with the Doxie Go model, there’s nothing stopping you from buying an Eye-Fi card to plug into your Doxie One.

The software that Doxie offers along with their scanners is a bulky 100+ MB download, but that’s mainly due to the extensive language and OCR support. Available for Windows and Macs, there’s no Linux version in the cards that we know about. Once you’ve imported all of your scans from your SD card  into the application, you can do a number of things. 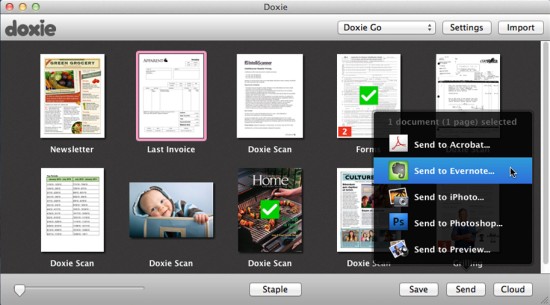 Since each page is a separate file, an important feature is the ability to group those pages together using the ‘Staple’ function. From there, you can save or send those pages as a group. For example, you’ll most likely want to save them as a PDF file (saving as JPEG or PNG will result in the same # of files as you had to start with).

Before you save the files though, you can adjust the scan if you want to tweak it or you don’t like the quality. To that end, you can adjust the contrast, brightness, saturation, rotate it to any angle (see my earlier point about feeding in papers at an off-angle), and crop it. By the way, the nitpicker in me still didn’t like that those white pages that I fed in off-angle might still have some black in the corner even after adjusting the rotation so the text on the page was even.

Another important feature for going paperless is the ability to find documents in your repository when you need them. And how do you find them? Search. To that end, the Doxie application has OCR (optical character recognition) functionality built in. You can save your documents as PDFs with or without OCR.

It recognized pages with typed up characters amazingly well, while the OCR was pretty much a failure for handwritten pages. (Incidentally, if you want handwritten pages with incredible text recognition, pick up a Livescribe smartpen. We reviewed an early model (the Pulse) a few years ago and simply loved it. Another must-have product!) In defense of Doxie, the Livescribe’s advantage is that it also has a recording of how you wrote those characters which is why its recognition is so good.

And in a nice twist of one advantage leading to another advantage, PDFs saved with black and white OCR are actually smaller than just a raw PDF. That’s due to the fact that storing text takes up much less room than having to store where the dots are one the page. And the text seems even clearer, so for the vast majority of cases, store your typed up docs as PDF with B&W OCR! You can also adjust how you’d like Doxie to save the OCR in the PDF, for example whether it should just add another layer to the PDF or replace the text it recognized with its own font.

I found that sending or saving as anything (PDF/BMP/PNG) took time and the dialog box prevented me from doing anything else in the application. Saving needs to be put in the background or into a queue so that it doesn’t interfere with your efficiency.

Within the software application, you need to add the apps you want to ‘connect to’. For example, if you want to send scanned docs to Evernote or Dropbox, you need to tell the Doxie app how to connect. For example, with Dropbox, it’s a matter of telling it what folder to add docs to, and with Evernote, you need to tell it where the evernote.exe program is. I did discover a minor glitch with sending to Evernote where I had to rename the file within Doxie so that it didn’t have any spaces.

Although I understand why Doxie decided to break up the target send to locations into ‘cloud’ and ‘local’, it’s a blurry distinction. For example, Evernote isn’t listed in the ‘Cloud Apps’ because technically what you’re doing is send it to the local application before it gets synced up to the cloud. For that reason, I’d much prefer a one-stop shop if you will of targets. Other cloud options included the usual suspects like Tumblr, Flickr, Google Docs and even Basecamp.

You could also choose to send it up to Doxie’s very own cloud storage which is free with your Doxie purchase.

There is no question that you can very effectively go paperless today. The tools exist – the hardware, the software and the storage. Doxie has created some compelling products to get you there. While there is still some polishing that should be done, mainly in the feature and user interface aspects of the software, you can go paperless right now and not worry about having to revisit the documents you’ve already scanned in and filed.

One other suggestion I’d give Apparent is to create some ‘best practices’ videos on how to use their software in an  efficient manner with a particular target. For example, what’s the best way to use Doxie with Evernote? Or Doxie + Google Docs/Drive? Sure, there are dozens of ways, but while the power users will always figure out the best system for themselves and completely understand what’s going on, most users just want something that works without having to worry too much about the inner-workings.

(The standard disclaimer: Gizmos for Geeks received a complimentary review copy of this product, but has no fiduciary relationship with the vendor.)