The MacBook Air is the “World’s Thinnest Notebook” – even thinner than the Sony TZ, which is 0.8 to 1.2 inches thick. It’s so thin it fits in a manila envelope. Seriously. See the image below! Apple’s goal was to make a high performance 3 pound laptop, with a full size keyboard, and large display.

The MacBook Air is so thin, it only has 4 ports: USB 2.0, Micro-DVI, headphone jack and a MagSafe 45w power adapter plug.

So what did Apple leave out? An optical drive. If you really want one, Apple is selling an optional external USB powered SuperDrive for $99. So how do you install software or get files off of CD/DVD? Apple has a new piece of software called Remote Disc which can be installed on any Mac or PC on your wireless network and will let you borrow that machine’s optical drive.

You can pre-order the MacBook Air today. Apple starts shipping them in 2 weeks. 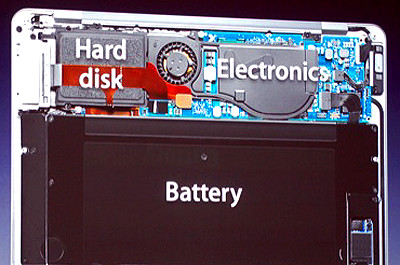 In addition to the MacBook Air, Steve Jobs also made the following announcements at MacWorld today: