On Monday, I was one of the privileged few to get to attend a special viewing of the brand new Airbus A380 airplane. I have a friend who is a fantastic photographer and a huge airplane buff, and thanks to his connection with a rep over at Qantas, we were invited to this special screening. [BTW, while I’m not sure whether or not I should mention their name, I can say this much, they were extremely friendly and I’m glad my buddy knew them.] Qantas is one of the larger airlines to have already ordered A380s, and worked with LAX (Los Angeles International Airport) and Airbus to run this compatibility trial, as it was called. While JFK airport in New York received a plane with 500 guests serviced by a Lufthansa cabin crew on the same day (Mar 19), LAX got MSN1, the very first A380 made.

Since the A380 that landed at LAX didn’t have the interior finished for passengers, we weren’t given a tour of the cabin, but we did get to go out on the tarmac and get quite close to the airplane. The perimeter that they created was a bit amusing (it matched the footprint of the plane), but we didn’t complain too much. After all, we were standing pretty much almost under the plane.

That morning we stood outside the airport very near to the leading edge of the runway that the A380 was scheduled to land on and watched it land. Later that day, we met a blogger who took a video of the landing [Other YouTube videos]. Not the best video, but it certainly conveyed the excitement of the crowd gathered to watch.

So what’s so special about the A380 [specs] apart from it now being the largest airliner in the world? In my opinion, the feature that stands out most is the double-decker passenger configuration. The wingspan is pretty impressive, but as far as overall size goes, it’s not as if it’s twice as large as the next largest plane in the world. As an LA Times reporter noted, “it doesn’t represent change on the scale its older cousin [Boeing 747] did.” In fact, it’s approximately the same length and width as a 747 give or take a few meters. One of the funny optical illusions is how short the A380 looks due to the height and fatness of the fuselage.

Enough talk. Here are some pictures from the special day. You can click them for the full size versions. 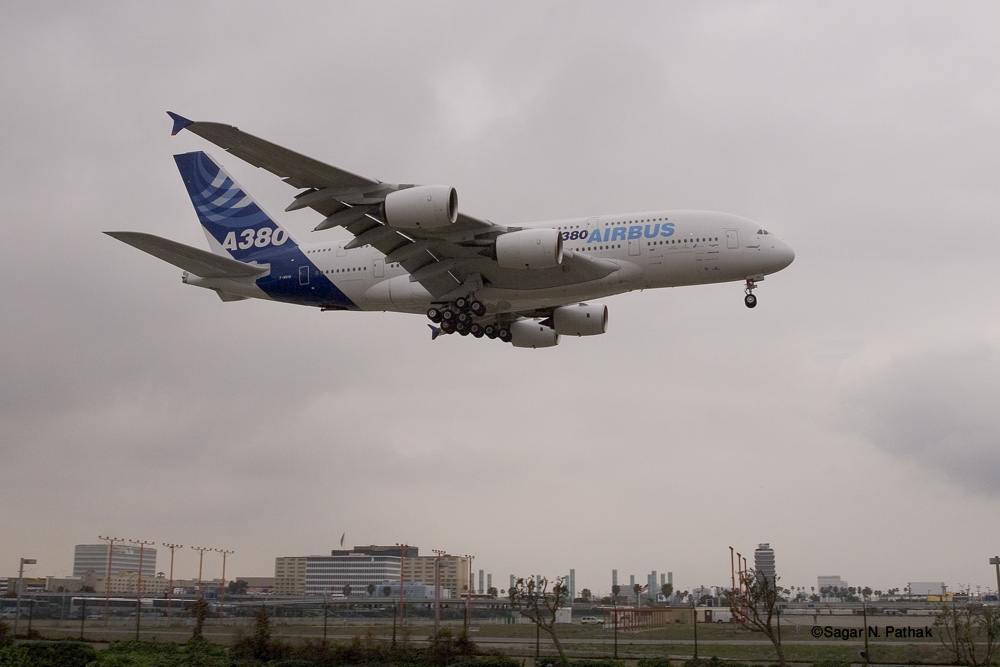 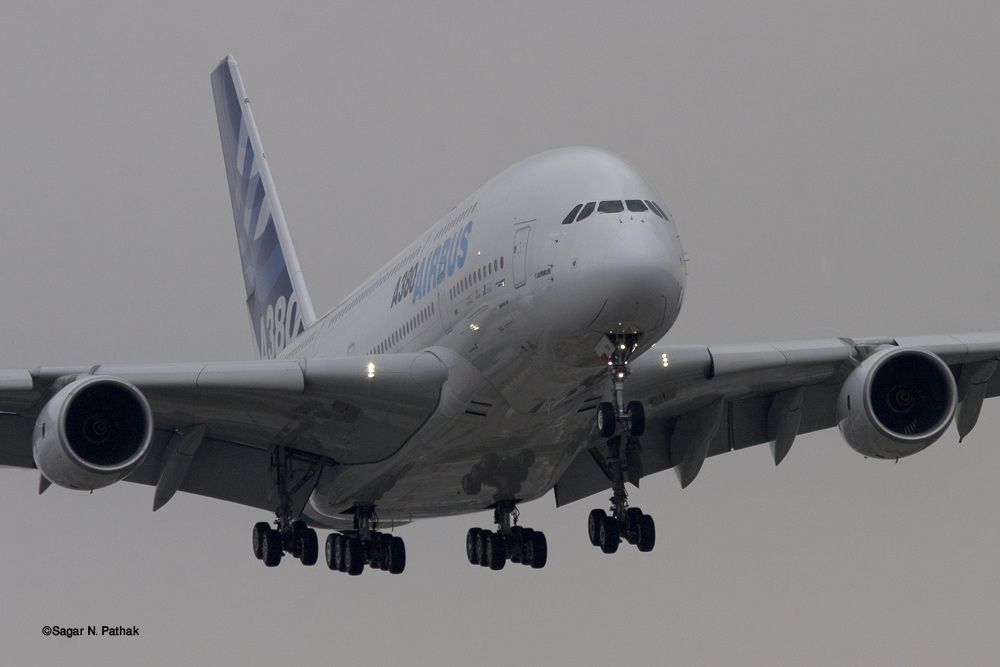 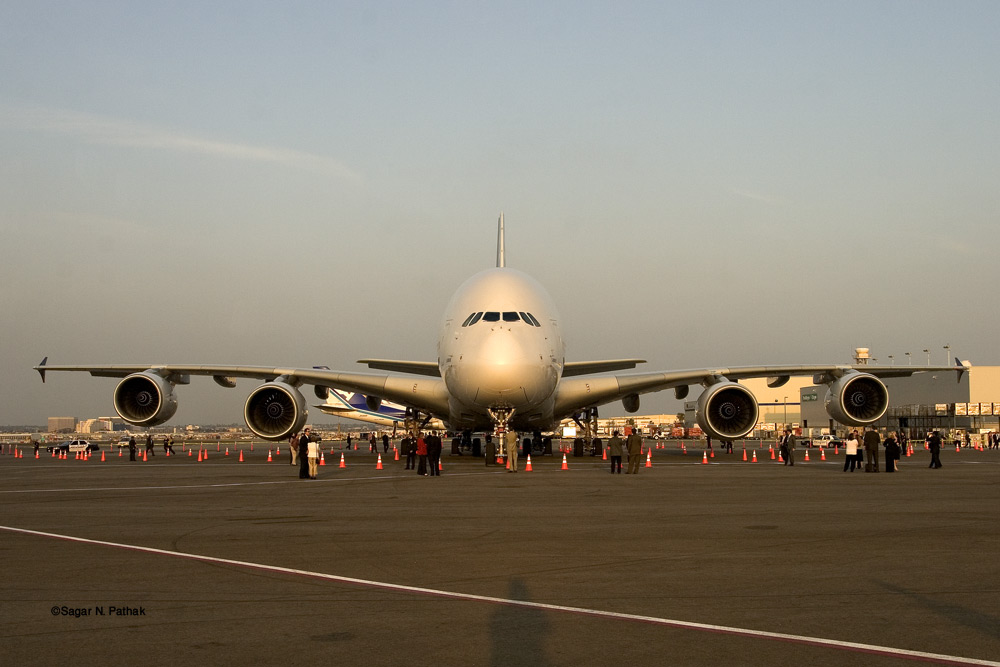 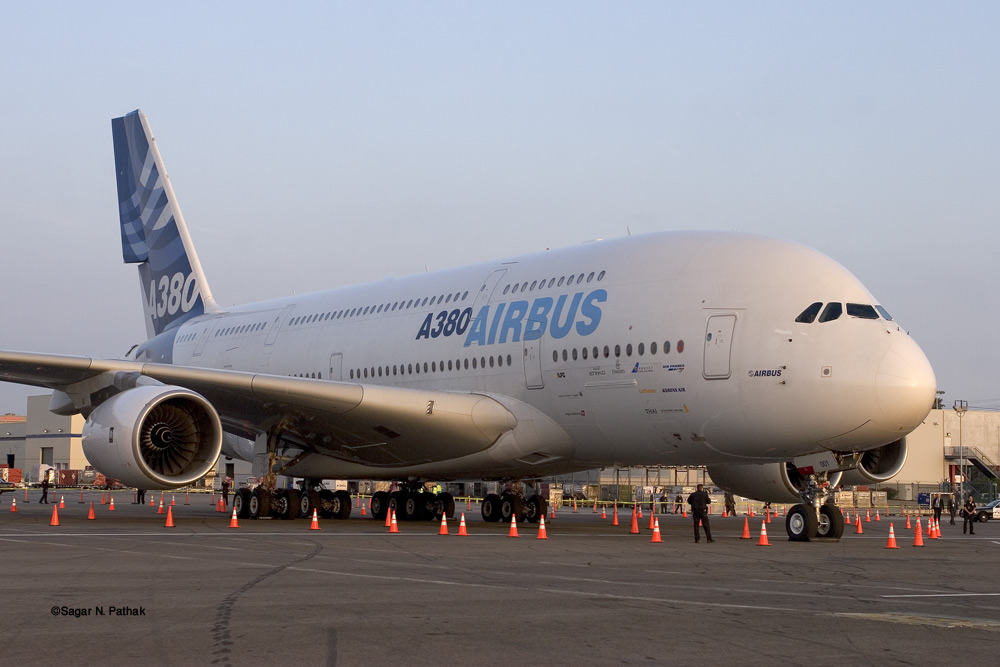