Muji CD Player – This CD player isn’t your standard “walk-around-very-carefully” music device. As a matter of fact, it looks a lot like a little lamp. The Muji CD Player is wall ounted, and absolutely indispensable, at around $180. You mount it, and turn it on by pulling the string. It’s flat, with its own built in speakers, and the CD faces out, so there’s nothing jutting fron the wall that your annoying roommate can knock off when he’s jogging around the house.

Dj Hero – Apparently the rest of the music genre world was feeling a little left out, and called Activision to complain. As of Fall 2009, Activision is premiering “DJ Hero“. Players will be using a mini-turntable controller device to spin original records and tracks by some of the world’s most popular hip-hop, club techno and dance artists. Prices are TBA, but we know it won’t be cheap! 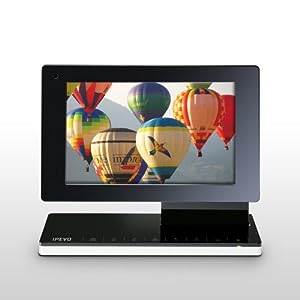 Kaleido R7 – If you’re all in favor of a sexy way to show off your pictures, then you must have the Kaleido R7. A flat 7-inch screen that rotates, pivots, includes back-lighting, and touch controls is only the half of it; you can stream pictures from your Mac or PC, upload pictures on a flash drive, or a variety of memory cards with its built in multi reader, view content from RSS feeds, and of course! –it’s Wi-Fi enabled. All this, for around $200.