One of the most eagerly awaited games of 2005, The Movies puts the player in the role of a movie mogul. Starting in the 1920â€™s in the age of silent films, the player is responsible for creating a movie studio empire.

Peter Molieneux, of â€œPopulousâ€?, Syndicateâ€? and â€œBlack and Whiteâ€? fame (among many other top-rate titles) attempts to blend a mixture of business management (ala Sim City), inter-personal relationships (ala-The Sims) and movie creation (think Adobe Premier) into an interesting and engaging title with lots of flexibility for creation and experimentation. Does â€œThe Moviesâ€? deliver? Letâ€™s find out. 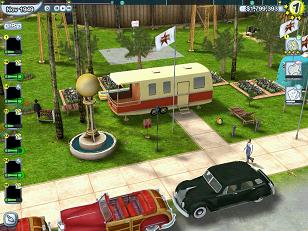 Iâ€™ve played with the game for a little over a week now, and I can honestly say that the answer to the â€œis it fun?â€? question really depends on how you look at the game. If viewed as a business simulation, yes, itâ€™s fun and engaging. As studio director, youâ€™re responsible for building sets, making the lot look nice (which boosts the studio rating, and keeps the talent happy), hiring and firing, instructing the script writers what genre script to create, casting the movies etc. Layout of your buildings on the lot can be very important as it takes time for the talent to move between sets, and to rest areas as well. Likewise, you have limited space upon which to build, and some of the sets are rather large, so you have to plan carefully and try to squeeze things in as tightly as possible.

The â€œSimsâ€?-like aspect of the game comes into play in trying to keep your various actors and directors happy so theyâ€™ll produce better movies. This can be somewhat frustrating however in that one of the ways to boost their happiness is to feed them or send them to the studio bar, and these characters can quickly become food addicts or alcoholics, requiring long stints in the studio rehab clinic. You also need to foster relationships between your actors and directors that will allow them to work better together to produce better films. 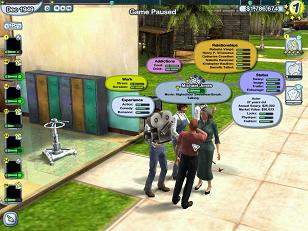 The video creation and editing aspects come into play by use of two special buildings available to the studio: The Advanced Script building and the Post Production building. The Advanced script building allows you to either modify a script created by your writers, or you can start from scratch and create your own script. Relax; youâ€™re not going to be typing in a full script here! Instead, Lionhead has provided a large set of pre-canned scene elements and character interactions. The player first chooses a set for the scene, then selects from the list of available scenes to shoot on that set. Chain a string of these together, select some props and costumes for the characters and youâ€™re all done. Once the movie is shot you can drag it to the post production hut which allows you to re-arrange the clips, shorten the segments, add in music (you can use your own music files off your hard drive) and voice (using a microphone attached to your PC), as well as change some of the colorization aspects of the movie (for instance, you can make a B&W movie in the color era if you so choose.) 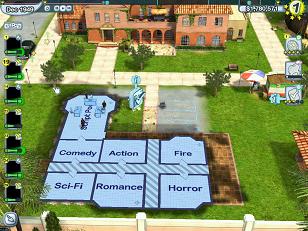 Unfortunately, the blending of these three game elements is where â€œThe Moviesâ€? falls short. The studio lot management and character interaction aspects are essential to the game, but the detailed script creation and post-production process exists only to allow the player to make movies that are (somewhat) appealing to real human viewers (the game allows you to export your movies for viewing outside the game.) All of the editing and script creation work in the world by the player has ZERO impact on the gameâ€™s ranking of the movie. The only aspects of the movie that impacts itâ€™s rating is the level of the talent involved in the movie, the fit of the characters to the genre and the novelty of the sets used, as well as the demand for that genre at that point in time. As a result, you can effectively play the entire game without ever going into either of the advanced movie making tools which makes those features of the game feel like a bit of an afterthought add-on, rather than an essential game element. Furthermore, the canned scene elements provided by Lionhead for scripting your movies are limited and do not give the player the level of control to really create a spectacular movie. Often it is difficult to find scenes that can mesh well together to tell the story that you want to tell. 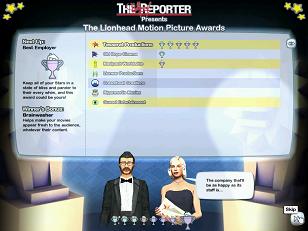 The game also tends to be lacking in the character management aspect as well. While you have to work hard to improve your directors and actors, providing ways to keep them happy and entertained, and managing their pay, you donâ€™t have to do so with any of your other staff. Writers, for instance, only improve by writing more, more and still more scripts, and giving them a better writing shack once itâ€™s available. While you have to occasionally give the director and actors some downtime to relax, you can work your writing staff to the bone, making them churn out script after script. Whatâ€™s even better is that you donâ€™t ever have to increase their pay! The same goes for the extras and crew.

Possibly the most frustrating part of the game is that you often find yourself without enough staff to perform all of the duties needed by your studio. As a result, youâ€™ll find yourself re-assigning staff from one roll to another in order to keep everything up and running properly. Youâ€™ll need a small army of builders and maintenance workers late in the game to keep all of the buildings in shape and clean. Likewise, you find yourself spending an inordinate amount of time micromanaging your actors and directors attempting to boost their skills and keep them happy or theyâ€™ll refuse to work. For a small talent staff, this isnâ€™t too difficult. Once you get more than five though it begins to become a hassle. 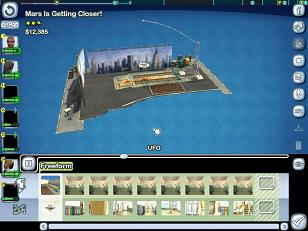 Visually, the game is excellent, with top rate graphics, and full zooming and camera control allowing the user to easily follow the action. One minor gripe is that you canâ€™t zoom the camera out far enough to see all of the studio lot, which makes planning layout somewhat difficult and frustrating. The sound, likewise, is well done, with a radio broadcaster occasionally chiming in with interesting and sometimes funny commentary in the background. Youâ€™ll also hear your directors calling out â€œActionâ€? and â€œThatâ€™s a wrap, thank you!â€? which helps you feel like youâ€™re really on a set. 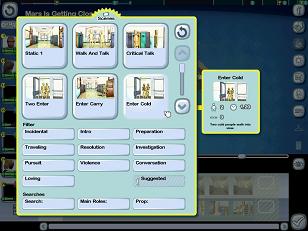 Lionhead also gets kudos for a useful, but unobtrusive help system that can be set to different levels of assistance. Set on the lowest level, the help system guides you along through all facets of the game and teaches you how to use new features as you unlock them. This is very handy the first couple of games you play, but begins to get in the way after you learn the game mechanics. Thankfully you can turn this off easily to allow you more flexibility in your game play.

The last issue with the game is that there is no difficulty level setting, and the game plays from the 1930â€™s to the modern era with a set timeline of world events. As a result, the game has limited replay value, unless you decide to take very different approaches to playing the business aspects of the game. Some players are reporting that they can play from start to end in roughly 20 hours (provided they do not do much in the advanced movie making tools.) There is no multiplayer mode to the game to change things up or provide more competition. As a result, there is some limit to how much youâ€™re going to get out of the game.