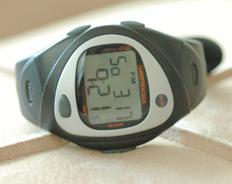 The Sleeptracker by Innovative Sleep Solutions is a product designed to monitor your sleep and wake you during one of the times when you are closest to being awake. The Sleeptracker is actually a wrist watch that is sensitive to motion, that you wear to sleep. We featured the Sleeptracker back in December and finally got a chance to try one out for a while.

As you probably already know, we all have sleep cycles, and at the beginning and end of a sleep cycle is when you’re closest to being awake and therefore this is the point when it’s easiest for you to awake. The basic premise behind the Sleeptracker is that when you’re at one of those points (most awake) in your sleep cycle, you stir or move around the most. The Sleeptracker monitors this motion with its built-in gyroscope and sounds its alarm. All you need to do is set a window of time (up to 30 minutes) during which you would like to be awoken.

The Sleeptracker is of the typical sports watch design – mostly enclosed in that solid rubbery plastic with a large LCD display. You could probably toss this watch across a room without a problem, well underhanded at least. My first problem with the Sleeptracker was that I found the rather large body a bit uncomfortable on my relatively small wrist. This may have meant that the motion sensor may have been inadvertently triggered by the watch slipping down my wrist. Most people won’t have an issue with this at all. For the most part, the watch was comfortable and did not bother me at night, although I’m a pretty heavy sleeper, and other folks may disagree.

One minor annoyance was that I found the button to change between modes (time setting, alarm setting, review, etc.) was very difficult to press. Of course, this was intentional so that the button isn’t accidentally pressed during the night. Still, I thought they could have made the action on it a little lighter. Speaking of modes, the Sleeptracker has several main modes: set the time, set the alarm, set your alarm window of time, and review of the previous night’s motion. As previously mentioned, once you set the alarm, you then set a window of time during which you want to be woken up. For example, let’s say that the latest you’d like to wake up is 7AM. You would set a window of time of 30 minutes. If the Sleeptracker senses any motion during that period (6:30 -> 7AM), it’ll set off the alarm. If it doesn’t, then an alarm will go off at 7AM as scheduled.

Here’s what I found to be the most useful feature: the review of the prior night’s data. Once your alarm has gone off, you can see all of the times during the night when you stirred, as well as an average time in between those motions. This is a great data capture tool that can help you figure out what your sleep patterns are like. You may also notice that once you start using the Sleeptracker your sleep patterns will change and that you may have longer sleep cycles. I would have liked to see the Sleeptracker track more than just one night’s worth of data and have a way (USB comes to mind) to transfer that data over to your computer for further analysis and archival.

So does it work? After using it for 4 weeks, hoping it would be the ‘miracle’ product that would help me get my sleep regulated and allow me to wake up feeling refreshed, I can say this: it wasn’t quite a miracle product, but it did help me wake up at that the end of a sleep cycle as advertised. However, and this was the part that I didn’t want to believe, it doesn’t matter if you wake up at the end of your sleep cycle, if you don’t get enough sleep, you will still feel its effects through the day. In other words, if you’re someone that needs 9 hours of sleep a night to feel re-charged, the Sleeptracker isn’t going to change that.

What’s Groovy: I thought the data review feature was easily the best feature, but I shouldn’t overlook the main attraction: the ability to sense motion and wake you at the right point in a sleep cycle worked quite well.

What’s Sucky: The price of the Sleeptracker was a bit steep: $150.