The Slappa PSP Complete Case successfully protected our PSP last week, so today the Geeks tested Slappa’s smaller Playstation Portable (PSP) case called the HardBody Case. We have been testing Slappa products for quite some time now and Slappa has garnered our respect for making high quality protection systems for various geek gear. Read on to see if this trend continues… 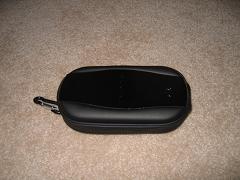 Slappa’s HardBody Case includes the same xEVA outer shell with their patented PVC design that is indictive of Slappa’s cases. Another nice innovation Slappa cases have featured lately are the rainproof zippers with two rubber pulls that include the Slappa logo. The back side of the case has an adjustable velcro storage strap for multiple transport options. Also attached on the rear of the HardBody Case is a spring loaded Carabiner Clip on a D-ring which allows for a quick clip to transport the case and contents. The HardBody Case has Slappa’s familiar logo on the front towards the bottom of the case with “Slappa” written across the center of the front. Both the logo and the “Slappa” name are embossed into the case. While the product is called a HardBody Case, it is not. The material is quite rigid but definitely bends under weight. 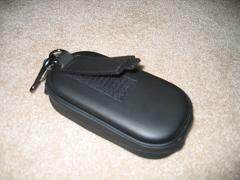 Internally, the PSP HardBody Case contains a cargo net and storage divider much like Slappa’s larger case, the PSP Complete Case. The cargo net works well for storing the earphones and remote control and could handle a Universal Media Disc (UMD) or two while the storage divider comes with two mini cargo nets that each fit a UMD. Even though the mini cargo nets are suppose to only fit one UMD each, two UMDs can easily be inserted. Along with the larger cargo net you could probably store up to eight UMDs in the case with earphones and a PSP but because the storage divider lays right above the PSP screen, I would not recommend that especially since any weight on the top of the case would push the contents down against the PSP screen possibly cracking the screen. Finally, there is a large elastic strap to securely hold the PSP in place. The only issue with the strap is that the back of the PSP rubs against the zipper and could possible be scratched. 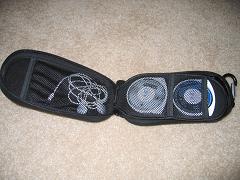 Again I have opted to perform the drop, crush and water torture tests with the HardBody Case loaded with two UMDs, earphones and the PSP.

Drop Proof Test
First I like to test the standard drops that any case carrying digital equipment might encounter as well as a few drop tests that might not be standard. Since I have tested several Slappa cases for various digital equipment, I am less and less worried with each case drop. 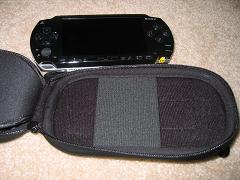 The drop test began with knocking the case off a standard height desk a couple of times. As suspected, the PSP and contents are safe and do not look like they have even moved as they are secured inside the case with the various elastic bands and cargo nets. The next drop test includes a drop and kick. As I am walking I drop the case in front of me and kick it a couple of feet. Since this drop test is par for what I do, I make sure to test in this manner several times. The PSP and contents again are safe and have either not moved or have barely moved. So far the Slappa case has protected my digital gear! The next drop test includes tossing the case and protected gizmo upwards and letting drop over six and half feet or so. While this is not a real world drop test, the PSP survives in the Slappa PSP Hardbody Case and I reward the PSP with a round of Tiger Woods!

Crush Test
After surviving the drop test I move on to the crush test. Sometimes with cases I test by standing and kind of grinding my heel into the case to see if I can get a crack or break. While the Slappa PSP HardBody Case is named “HardBody”, the actual material of the case is not rigid and would definitely not hold up to a stand test. While the edges of the case are more rigid, perhaps due to the weatherproof zippers, the center of the case can be pushed in decently easy. I tested the Slappa case by packing my laptop case with a laptop (a Dell C840, so it’s a real horse!) as well as several other items causing the weight of the laptop case to tip the scales at around 15 pounds. With the Slappa PSP HardBody Case on the floor, I slung the laptop case on top of the PSP case to simulate a typical situation that I would accidentally put my PSP into. After removing the laptop case the PSP booted fine. 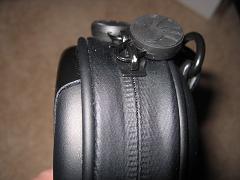 One note about the crush test, I did not want to break my PSP screen so I loaded the PSP case with the recommended items including two UMDs, the remote and the PSP. I noticed if you overloaded the PSP case by perhaps doubling the number of UMDs to four, the divider pushes slightly on the PSP screen so I would highly recommend not overloading the case or if you do, not to push on the center of the case.

Waterproof Torture Test
The final test we pushed the Slappa PSP HardBody Case though was the dreaded water torture test! While the Slappa PSP cases do not claim to be waterproof, Slappa does contend that the PSP HardBody Case is rain-proof. To simulate a hard driving rain, I turned our test sink on full blast and ran the entire case, especially the zipper seam, under the water stream for a full thirty seconds. The exterior of the case was soaked but the water was beading on the case while the inside of the case was dry. I definitely would not count on the case being put underwater, but the case should stand up to the harshest rain storms.

You can purchase the PSP case at a 10% discount directly from Slappa.

The Carabiner Clip works great as do the cargo nets in the case. The design of the case is Slappa sleek as usual and the rain-proof zipper Slappa has been using lately works great.