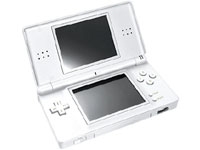 Fresh from the midnight madness pre-order rush is our newest toy – the Nintendo DS Lite, an updated version of the popular Nintendo DS handheld video game system released in 2004. The DS Lite features include a 20% smaller body, lighter weight, increased battery life, newly optimized layout of controls, and much brighter LCD screens. Since the new system is essentially identical to the older DS in terms of gameplay support, does it really make sense to make the Lite upgrade? Read on to find out!

Anybody who has ever spent much time delving into the bargain bin of their local EBGames has no doubt come across a title published for one Nintendo game system or another. From the early days of the NES in the 1980s to the many generations of GameBoy handhelds since, Nintendo has been a steadfast force in the video game industry. Very few 30-something guys and girls today, not to mention teens and kids, would not know who you are referring to if you mentioned names like “Mario”, “Zelda”, or “Final Fantasy”. These are all classic icons of a very well respected game company whose games appeal to people of literally all ages.

Nintendo’s latest entry in the handheld portable gaming market is the DS Lite, a shiny, sleek, almost *gasp* _sexy_ upgrade to the already hugely popular DS. One might immediately think of Apple Computer’s iPod when looking at the DS Lite, because at least in the North American market, it is stark white in a protective plastic casing. Even though the Lite is fairly light, it feels nice and solid in the hands. The controls are laid out similarly to the original DS, with the joystick d-pad to the left of the lower screen, the 4 X/Y/A/B buttons to the right, and the Select/Start buttons below. There are also two buttons mounted flush with the top side of the unit, meant to be triggered by the left and right index fingers respectively. The power switch is smartly located on the side, and seems to be fairly difficult to accidentally hit while playing – a good thing when you’re in the thick of a battle!

The DS Lite, like its predecessor, has two LCD screens. The lower screen has the added feature of being touch sensitive, and this has really helped catapult the DS systems into the forefront of portable gameplay because of the added control interface available to game developers. Many very original and sometimes quirky games have been released for the DS that could not be played on a more conventional system sporting only buttons and joysticks, and there are even a few that rely on the touch screen exclusively. Whether it’s pulling back a ball in a slingshot to hit a moving target, or picking a power-up item from a bonus stage, the touch screen really adds a new level to the DS experience.

Even though Nintendo apparently made the right decision on the touch screen, one common complaint about the original DS was that the LCD screens were not very bright. Well we’re pleased to inform you that that problem is a thing of the past with the DS Lite. We really believe that the term Lite was picked not to describe how much less bulky this system is, but how much BRIGHTER it is. It’s really not easy to describe in words, but if we had to quantify this, we’d guess it’s at least 300% brighter on the full brightness setting, and let us tell you, that is B R I G H T ! ! Most gamers will probably be more than satisfied with the 2nd highest setting, because not only does the screen have more punch, but it’s also got more zazz… in the form of sharpness. These screens really look spectacular, and bring out very fine detail that was always there in your DS games, but you never got a chance to see before. We expect gamers will be replaying a lot of old classics from the DS once they get their hands on a DS Lite.

Unfortunately, as with all LCD based systems, there is the possibility that you might find a pixel or two that doesn’t quite work right. What you will see if this happens is a pixel that stays lit when the screen goes dark, or a pixel that stays dark when the screen becomes bright. Fortunately we’ve been told that this is a very rare occurrence, but we have noticed a few reports out there with people encountering these “dead pixels” on brand new DS Lites. Nintendo is very supportive of its users though, and should you encounter a problem, they provide excellent support over the phone. Plus the DS Lite is backed by a full 1 year warranty, so if you are unable to live with those multicolored gremlins on your screen, Nintendo will take care of repairing your unit – including shipping. We say this because we actually encountered this problem on the first DS Lite we received, and Nintendo has been top notch in helping to resolve the issue.

One other aspect of the system that goes hand in hand with the excellent visuals is the audio. Now, normally us geeks like to crank out the monster jams on big 1000 watt plus speaker boxes, but somehow Nintendo didn’t really think that was such a good idea for a portable system. So they decided to keep it simple – two speakers mounted on either side of the top display. At full volume, in a quiet room, the sound is more than adequately loud enough. But get a few people talking nearby, or perhaps find yourself in a busy subway station, and you’ll probably realize that the sound isn’t quite loud enough to overcome nearby distractions. That’s why we recommend using a pair of ear bud headphones with the DS Lite. The sound from the headphone jack sounds much better than from the speakers. But, to give the speakers credit, the surround sound effect from New Super Mario Bros does sound quite good when listened to without headphones.

A quick mention about two other features that haven’t changed since the original DS. The DS Lite includes a microphone under the top display which provides a way for games to do things like voice recognition, or just to respond to your breath when you blow on it. Again, like the touch screen, game developers are finding very creative uses for the microphone, and are incorporating it into new DS games. The DS Lite also supports multiplayer gaming over a wireless link. You can play with friends who have their own DS Lite nearby (within about a 60 ft – 100 ft range), or world-wide when you are near a wireless hotspot connected to the Internet. We are very impressed with Nintendo’s decision to allow one DS Lite unit to share its game with others, so that only one cartridge is required to play the multiplayer aspects of a particular game. Many DS games support this now, and we expect this will continue into the future with new games as well.

So then… the burning question! Is the DS Lite worth upgrading to from a DS? We have to emphatically say yes, because chances are, if you like your DS, you’re going to LOVE the DS Lite. In particular, if you already have a nice library of games for the DS, each one of them will be a new experience on the Lite. The crisp, bright displays, combined with the sleek design and comfortable layout of controls translates into one of the best portable gaming experiences out there. In addition, all Game Boy Advance game cartridges are still supported on the DS Lite, so mega bonus points for you if you bring that into the mix! It’s really hard to find any fault at all with the system, and we geeks recommend this as a gift for anyone you know who is at all interested in video games.