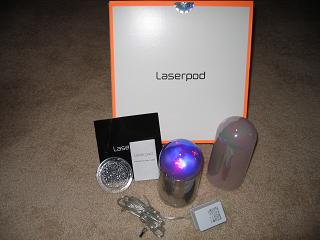 Laserpod, the first product offering from Plugg, uses the latest in laser, LED and crystal optics to create ever-changing organic lightforms. The product, which has been described as the modern equivalent to the lava lamp, was designed in Great Britain by light artist Chris Levine and world-renowned photographer Mario Testino. Using laser light refracting through a rotating Swarovski crystal and blue LEDs for ambient color lighting also being projected through the crystal, incredible lighting effects are created. The unit is now being sold in the US for an introductory price of $99.

The Laserpod’s main unit comes in a sleek aluminum casing and a set Swarovski crystal, a glass refractor lens, two different electroplated domed diffusers (short and tall), an AC adapter and instructions and a LaserPod “Book of Light” leaflet. By unscrewing the base of the unit you can insert 3 AA batteries for portable use. The product measures 10 x 8.5cm (h x d). 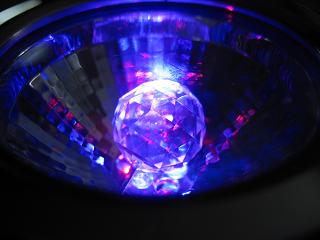 The included ridged glass refractor lens softens the laser light (red light) and can be used in combination with either of the diffusers, by itself or not at all. The shorter of the electroplated domed diffusers is tinted more than the taller diffuser and therefore works better in a higher lit area as the blue of the LED lights and the brilliant red of the lasers really show through nicely. The taller diffuser stretches the laser light creating a cool effect but the colors are not quite as brillant or sharp as the shorter domed diffuser. 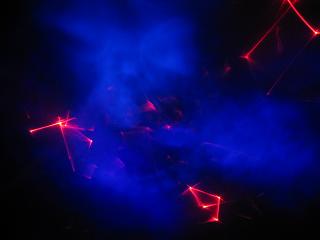 Finally, you can leave off the diffusers and project the lights on the ceiling. For the best effect here you really need low to no ambient lighting as the blue of the LEDs fade quickly in a lighted room. The red of the lasers projects nicely even in a lighted room unless you put on the glass refractor which softens the laser light which then fades into the ambient lighting.

Using the glass refractor with no diffuser in a low lit room creates a basic sky ceiling similar to Aurora Borealis on the ceiling. Rather than using fiber optics (or even LEDs) in a ceiling of a home theater for instance, you could place a LaserPod in the center of the room for the same effect for much less money!

Finally, everyone I showed the lighting effects of the Laserpod to universally said “cool”.

The near silent operation of the LaserPod and the incredible lighting effects the product can produce give the LaserPod a recommendation from the geeks!

You can buy a Laserpod from Dry Ice Online.

What’s Groovy: The concept, the design and the product in general personify grooviness and makes
a great gizmo for any geek!

What’s Sucky: Nothing! Seriously, this product only gets grooviness points.