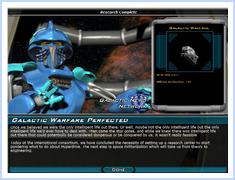 Stardock Systems is back, with an all new incarnation of their space based turn-based strategy classic, Galactic Civilizations II: Dread Lords. The Geeks have spent the last month putting this new version through its paces to see how it stacks up against its forbearers and the competition.

For those unfamiliar with Stardock and the Galactic Civilizations franchize, a bit of history is due here. GalCiv (as it is commonly referred to) started out in the mid 1990â€™s as one of the top games for IBMâ€™s OS/2 Operating System. The game was well received as a fun, encompassing game, with extremely powerful AI opponents that did not cheat (unlike the AI found in similar games such as Sid Meierâ€™s Civilization series.) In the 2001-2002 timeframe Stardock released an updated version for the Windows platform with improved graphics, but much the same game play as the original (Brad Wardell, head of Stardock once mentioned that it took the Windows platform that long to catch up to the multithreaded capabilities of OS/2 and the AI system in GalCiv is heavily multithreaded.) GalCiv 2: Dread Lords continues the franchise, incorporating all the things that made the original game work, while adding several interesting features.

Like other games in the genre, GalCiv is a traditional Explore, Expand, Exploit and Exterminate game. Players chose one of the distinct races to play (there are 10 default races, plus the option to create a totally custom one of your own.) Each race has itâ€™s own default attributes and bonuses, but the player can also modify those bonuses as well. Some bonuses allow faster production, or increased population growth, faster research, better combat, etc. Many of these bonuses have multiple bonus levels. As such, players can set up a significant bonus level in one attribute, but at the expense of limited bonus diversification. The game can also be configured to different AI levels, and different size galaxies, with options for the frequency of habitable worlds and number of opponents. We warn the first time player, set the AI lower than you think, and the overall game difficulty even lower! You have been warned! 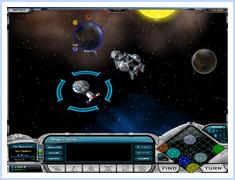 At the start of the game, the idea is to scout the region around your home system, find other habitable planets and send colony ships to claim them. As your empire expands, you research new technologies which allow you to add various improvements to your planets, build better ships, upgrade your starbases, and increase your influence. All the while, youâ€™ll be setting up trade routes with other races, dealing with political negotiations, fighting a few wars, and voting in an intergalactic UN. While this all seems pretty standard fare, itâ€™s in the details that GalCiv 2 shines.

First off, the tech tree that helps advance your raceâ€™s abilities in GalCiv2 is absolutely huge! The geeks have yet to play a game where theyâ€™ve exhausted the tree. Our only gripe (as others have also mentioned) is the explanations of what each technology does for you are pretty lacking, but hopefully Stardock will address that in a patch.

New to GalCiv2 is the ship building system. Not only do you get to choose how to equip your ship with different guns, defenses, and miscellaneous equipment, but you also get to decide where to mount them, their visual size, and also add and modify purely visual elements of your ships. As a result, itâ€™s possible to create some very unique ship designs that can be saved, shared and reused in later games. (In fact, this is one of the more interesting parts of the game, and itâ€™s easy to spend hours in this screen designing some radical looking ships.)

The AI, as stated earlier, is excellent. How good? The geeks have seen the AI players realize that we were the dominant species, didnâ€™t like that we were brutal dictators, and saw all the opposing teams gang up on us. In another game, we played as the good guys, but were dragged into a war. Just as we were about to conquer the aggressors, they surrender to one of our rival nations, helping the rivalâ€™s cause and robbing us of the spoils of war. And mind you, this was on the EASY levels! 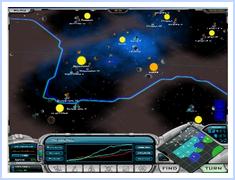 Combat comes in two flavors: Space and Ground. In both cases, the game handles all combat automatically and is based largely on various numerical factors including racial bonuses, technology levels, number of combatants on each side, and some luck. Fleet sizes are kept in check by your current logistics technology level. The higher the level, the more logistics points you have per fleet. Of course, the bigger the ship, the more logistics points it requires from the fleet. (For instance, you may have 12 logistics points, with a medium size ship requiring 5 of those 12, leaving you 7 more points for other ships in the fleet.) This helps keep the combat reasonable (unlike the mega ship count fleets found in the original Masters of Orion.)

Starbases come in 3 flavors and can be built anywhere (even in enemy territory, although youâ€™ll likely find a very upset enemy race by doing so.) Military starbases help support your fleets and help increase your logistics count and combat abilities. Influence starbases spread your culture and help push the boundaries of your space. Itâ€™s possible to use these to perform a culture â€œflipâ€? on an alien world by pushing enough of your culture to make the citizens revolt from their masters and want to be part of your nation. Finally, economic starbases help increase the financial benefits of worlds within their influence range.

Stardock also gets serious props in two other areas. First, there is no copy protection or DRM on this game. We repeat â€“ NO DRM! Yes, you read that right. Stardock feels that itâ€™s better to treat us all as adults and hopes that once you play the game (even if illegally) youâ€™ll be so hooked that youâ€™ll want to buy it. How does Stardock hope to make any money this way? Well, you have to have a legal copy to connect to the patching system to get updates. It apparently is working because they have sold more copies of GalCiv2 in the retail stores in the first two weeks than they did in the entire run of the original GalCiv. That leads us to the second point. Stardock has built a very nice integrated patching and game purchase system. It works somewhat like the Valve Steam system, but is quite a bit less intrusive. You can purchase the game (as well as every piece of software Stardock has ever written, and games from many other small independent companies as well) here. The downloads are fast and painless. Finally, Stardockâ€™s developers routinely read and comment on the gamesâ€™ forums and message boards. They routinely take input from players to add into the game, and the development team patches the game on an amazing pace. The geeks even saw a patch released on a Saturday afternoon! (When was the last time you saw that from a major software house?)

So, are there any down sides to this game? Well, yes, there are some, but they are more nit-picky. First, we would love to see a multiplayer capability, but the developers have said that it would have added another year to the development and would have required them to take out 40% of the game to do it (frankly, the AI is good enough that we donâ€™t miss online head to head play.) Second, in many ways, the game isnâ€™t all that much more than what was in GalCiv 1. Of course, the same could be said for the Civilization series. The graphics are somewhat upgraded over the original, and the ship builder is a nice new feature as well.