If you’re a gamer, and even if you’re not, you probably sometimes groan when having to learn a plethora of new keyboard commands. First person shooter games are notorious for having a complex key map to allow players control in their virtual world. Simulation games and real time strategy games can be even worse (since their key maps tend to be even more specialized and non-standard.) Likewise, how many times while working on a spreadsheet or doing photo editing or some other drawn out task did you wish you could just hit 1 key to start a macro of multiple keyboard shortcuts to be fired in order? If you fall into any of these categories, then a product like one of the Belkin Nostromo Speedpads is for you!

What exactly are the Speedpads? Think of them as the natural complement to the mouse (assuming you use the mouse with your right hand.) The Speedpads are a fully programmable keyboards + specialized controllers that you operate with your left hand. The idea here is to free you from having to take your hands off the mouse to operate the keyboard, and more importantly, put your most commonly used keys and actions at your fingertips without having to traverse a full keyboard. While the devices are designed for the gaming community, these units can also be very helpful for other tasks that are typically performed via a keyboard. When we say fully programmable, we mean FULLY! While the two models have slight differences, the number of actions that can be controlled by the units is astounding (> 100 on the n52 model!) Each key, button or directional pad press can trigger either an individual key on the keyboard to be pressed, or a macro of keys to fire in sequence. Macros can trigger repeating actions, simulate both key-down and key-up actions (for software that does different tasks on each action) and even time delays between the various key presses. 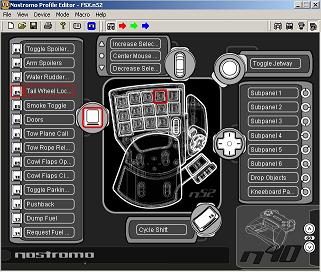 So how do you go about programming these units? The devices come with a great pair of applications called the â€œEditorâ€ and the â€œLoadout Managerâ€. The editor provides you with a graphical depiction of the device, and allows you to quickly assign functions to each of the units buttons + keys. Simply select the button you wish to assign an action to, specify either â€œSingle Keyâ€ or â€œMacroâ€ and you’re presented with a wizard asking you either to â€œPress the Key you wish you assign to this buttonâ€ or a window where you can record your key presses, respectively. The macro editor also allows you complete control over the timing between keys, repeats, etc. Once you have your key map set up the way you want it, save it and then open the Loadout manager. This application (which is set to run at system startup) tells you which Belkin devices you currently have attached to your machine and allows you to specify which key mapping file you want assigned to each device. Here in lies one of the biggest differentiators between Belkin’s Speedpads and similar devices from other manufacturers â€“ you can have multiple Speedpads attached to your machine simultaneously with different key maps on each! Who would do this you ask? The geeks know of more than one World of Warcraft player that uses multiple Speedpads with macros assigned to all their keys, allowing them to completely avoid using the keyboard. The biggest compliment we can give Belkin is that their software just WORKS and it’s easy to use. The only complaint we can give is the lack of XP x64 Edition drivers (something we sincerely hope Belkin fixes with Vista’s x64 edition release looming.)

Physically the two units are very similar, but there are differences as well. The older n50 unit has 10 keyboard-style keys, a D-Pad control and a â€œthrottleâ€ control. The newer and slightly larger n52 unit has 14 keys, the D-pad, 2 additional buttons and replaces the throttle control for a standard mouse-wheel type control (also press-able.) How does this give you >100 functions you ask? You can assign up to 4 different functions to each button through the use of â€œshift modesâ€. You can make the shift modes be either momentary (think like holding down the shift key on your keyboard while pressing another key) or locked (like the caps lock) or you can use one button as a shift cycle button.

Construction of both units is very solid (we’ve had our older n50 unit for nearly 3 years now and it’s taken the wrath of being slammed onto the desk in FPS death throw disgust on many an occasion and keeps on working!) The older n50 unit is slightly smaller and features a removable ergonomic palm rest (the n52’s larger size doesn’t require one.) Key response is solid albeit somewhat stiff initially, but considering the wear and tear these units are designed to take, you want a good stiff feel so it will last.

So, how do they game? VERY well! These units are a FPS gamers’ dream, allowing all the major controls to be at your fingertip without having to put your hand in awkward contorted positions. Macros allow you to do actions such as â€œswitch from weapon 3 to the frag grenade, throw it, then switch back to weapon 3â€ â€“ all with a single press! For you Counterstrike players out there, imagine being able to macro your entire start round buy list with 1 button. For you Flight Simulator users, consider being able to work all the radios and autopilot through the n52’s keypad, using it’s mouse wheel as your â€œdialâ€ to change altitudes and frequencies. The number of possible combinations are almost endless. Some users will want to assign the traditional WASD keys to the Speedpads’ keyboard buttons (in fact, the n52 comes with that pre-assigned by default), but we’ve found that it’s actually quite useful to set the D-Pad up as your movement keys and save the keyboard keys for functions like run, reload, jump, crouch, etc.

Unfortunately, the one (and only) complaint that we have with these units also stems from their open ended programmability and versatility â€“ it’s downright difficult to remember what you programmed each key or button on these units to do! The Editor software does allow you to print out a key map listing what function is assigned to each button, but it’s listed in a tabular text format, not a nice graphical one corresponding to the unit’s layout. Nothing is more frustrating than being in the middle of a game and trying to remember â€œNow which button did I set to be my reload???â€ BANG! (you’re dead). The geeks are hopeful that future products such as these will incorporate some sort of visual reference (maybe OLED programmable keys?) to help alleviate these issues. Even so, with a bit of practice you’ll get used to using the Speedpad. Your scores will tank initially, but within a few hours, you’ll be doing the â€œcircle of deathâ€ with the best of them!

So which one should you buy? Both units are excellent, but we have to say that the newer n52 is the better of the two (although users with small hands might prefer the n50 model.) The n52 just has more keys, the full mouse wheel control (a feature we found sorely lacking on the older n50 model) and it’s slightly more ergonomic layout (a button that is pretty obviously meant for controlling shift mode for instance) makes it a hands down winner in our book. That’s not to say that the n50 is a bad unit either, as it has been part of our front line FPS arsenal for several years now.