Do you get too much e-mail, whose volume has grown significantly in recent times due to social networking notifications from the likes of Facebook & Twitter?

How do you sort it out and quickly? Filters? Folders? Those methods may be doing the trick right now, but Mozilla Labs is working on a different approach – creating views of your messages (not necessarily e-mail only) and letting you interact with those conversations without having to switch applications.

The new project is called Raindrop and while it won’t necessarily replace your e-mail client, it could significantly complement it. Although still in its infancy, Raindrop has promise.

Here is a screenshot of what one of its screens may eventually look like, although it’s in dynamic flux right now, and a video explaining the basic ideas in Raindrop. You can download the 0.1 release from the Raindrop home page. 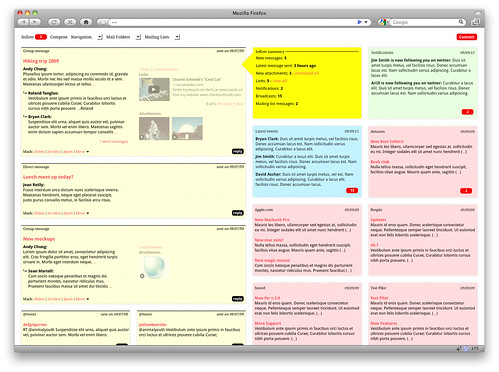 Raindrop UX Design and Demo from Mozilla Messaging on Vimeo.