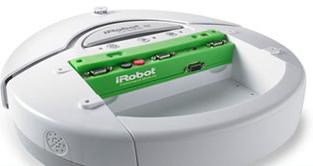 There are already numerous articles on the Web on how to hack your Roomba. In fact, there’s even a book. But the Roomba is a consumer appliance that was designed to do a specific job – vacuum your floors. For those of yout that want something similar that’s designed with hackability in mind, take a look at the iRobot Create.

The Create is an assembled development robot that is based on the Roomba. It has an open interface, and you can send commands to the robot via the serial port and it has over 30 built-in sensors. Wow. Ok, so it does some stuff out of the box, but what else? Well, there are expansion ports that you can add on things like more sensors, actuators, and arms. And via the separate command module, you can run code you write on the bot.

Examples of things you can do with the Create include performing various behaviors, moving around, playing sounds, lighting its lights, taking input from its sensors or buttons, and reacting to its environment. By adding additional hardware, users can develop robot ideas and behaviors of their own. Some ideas that robot developers have used the Create for include a robot bellhop that follows you while carrying your belongings, a bionic hamster and a robot that brings you drinks from your refrigerator.

Price: $129.99
(Please note prices are subject to change and the listed price is correct to the best of our knowledge at the time of posting)