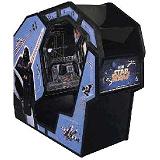 For all the UK Star Wars Geeks we have a present for you… an original Star Wars Cockpit Arcade Machine restored in all it’s vector graphics glory for the 30th anniversary of Star Wars.

Pilot the X-Wing Fighter in the classic color vector arcade game! Blast away TIE Fighters, zoom across the surface of the Death Star, and roar down the trench with sampled voices and effects from the movie!

The game features a dramatic state-of-the-art color vector graphics system that produces surprisingly realistic effects. The sound track is laced with the familiar voices of Luke Skywalker (“Red Five standing by.”, “I cannot shake him!”, “This is Red Five. I’m going in!”, etc.), Obi-Wan Kenobi (“Use The Force, Luke!”, “Remember, The Force will be with you. Always.”, etc.), Han Solo (“Yahoo! You are all clear, kid!”), Darth Vader (“I have you now!”, “The Force is strong with this one!”, etc.), Wedge, and even R2D2 (various beeps and electronic sounds, documented in the manual as “Yes”, “No”, “I agree”, “Sequence completed”, “Ouch!”, and “That really hurt.”). There are also seven different musical themes from the movie that are played throughout the game including the Star Wars Theme, Ben’s Theme and the Mos Eisley Cantina Band’s number.

I wonder how many quarters I pumped into this machine when I was growing up?

This machine comes as a freeplay unit. A coinmech can be added for Â£150.

Price: ~$8000 or Â£3,995.00
(Please note prices are subject to change and the listed price is correct to the best of our knowledge at the time of posting)