A perennial favorite, Sid Meier’s Civilization series has set the standard in the past for turn based strategy games. Now the 4th generation in this series is released, with a new fully 3-D graphics system and some changes to the tried and true formula that has made Civilization the masterpiece series that has spawned imitations and hybrid versions (namely Sid’s Alpha Centauri, and Colonization.) How does this new version fare? 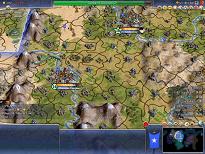 Players new to Civilization find themselves dropped into the role of the leader of a nation at the dawn of history, charged with the goal of establishing and growing their nation to becoming the predominant nation on the globe. Players explore the world around them, founding cities, building improvements and Wonders (which provide various bonuses). Along the way the player is faced with other nations, all with similar aspirations. As a result, the game eventually turns into a race for dominance with nations competing over resources, land, and influence. The game has several victory conditions, ranging from eliminating all opposing nations, to building a space ship to send your nation to the stars. These elements have been the tenant of Civilization, and should be familiar to players of older versions.

While the new version takes on the same basic concepts of the older versions, there are substantial differences. Upon the start of the game, the most obvious change is the graphics system, which is now a fully 3D modeled world. Players can zoom in to units, or out to see the world as a globe, and the view can be tilted 45 degrees in either direction (but it doesn’t stay there.) While the 3D graphics are nice, they are not what’s important, and many die-hard Civ players are complaining on the game forums about the higher graphics card requirements imposed to support them. While we can sympathize with this view (Civ has had a history of being very playable on limited hardware, where this version is not), the new graphics system does allow the player to quickly assess the status of any unit or city or square instantly without having to dig down into detail views as was required with older incarnations.

Another change to the graphics engine can be seen in the unit indicators and combat animations. Now you can instantly tell the strength of a unit simply by looking at the number of troops in the unit (max strength shows 3). Combat animations show the action and it’s rather entertaining. These options can be turned off however, and strength indicators more like the older versions can be used. Also, turning off these options can speed game time significantly. 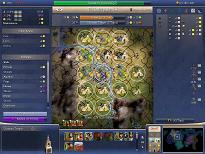 Other major changes with this version include the concept of civics, and the use of religion. In older versions, you would research different forms of government (Republic, Monarchy, Democracy, Communism, etc.) and could change your government to each form, gaining various bonuses and limits with each. In this new version, civics are much more diverse, with civics being broken into 5 different categories (Government, Legal, Labor, Economy, Religion) each with 5 different options. The player can research the options and as they unlock, they can choose from the various combinations. For instance, it’s possible to have a government that follows the tenants of Hereditary Rule, Free Speech, Caste System, State Property and Pacifism, or the tenants of Police State, Vassalage, Emancipation, Free Market and Paganism, with each option having it’s own set of advantages and disadvantages. This allows the player much more flexibility in styling his or her government to meet their needs.

The concept of religion has changed as well. Seven of the world’s major religions have been included in the game. The first nation to research particular technologies is considered the founders of the corresponding religion. While no religion is considered better to have than any other, religion plays an important aspect in the game. First of all, if you set a state religion, any city that you have that contains that religion gets a culture and happiness bonus. Likewise, you can spread your religions to neighboring nations by sending missionaries to their cities. Any city that you send a missionary to is forever visible to you and as a result, you get the effects of having a spy in those cities. Finally, when dealing with AI controlled nations, having the same religion as the AI player often can mean the difference between getting a successful trade negotiation or being brought down into a holy war.

The AI in this version has been improved, (supposedly) with the AI players no longer being given the ability to cheat on the higher levels. Instead, difficulty is set by changing the resource gather rate, the speed that workers build improvements, and production and research schedules. At the lower levels, new players can have a satisfying experience without being overwhelmed. At the higher levels, the AI can be downright nasty to go against, and you better bring your ‘A’ game if you plan to succeed.

The multiplayer aspects of this version are superb, and unlike previous versions are built in from the start. While some players have experienced problems, the reviewer has played multiple online games with no problems at all. Multiplayer games can range from hot-seat (everyone sharing the same PC), play by E-Mail (where an e-mail system sends the game state back and forth between all players, sort of like chess by mail) and traditional multiplayer games. One of the more interesting aspects of the traditional online play is that players can leave the game, have their place taken over by an AI, and then come back in later to continue the game. This makes playing with a group of friends much more tolerable since people can drop off to have dinner or spend some quality time with their S.O. and not feel like they’re causing everyone else a problem. Likewise, multiplayer games can be saved and restored at a later time.

One of this reviewer’s biggest complaints with older incarnations of the series stems from the slow game play experienced later in the game when you have numerous units to control. Time goes by in smaller increments and as a result game play screeches to a halt. This can cause a game to drag on for many hours, particularly if playing on a large map size. Firaxis has recognized this problem and worked hard to reduce the amount of direct control the player has to exert. Workers can be set on automatic now, and what used to take 3 or 4 clicks to do in past versions now can be achieved in 1 or 2. When playing in single player, with animations turned off and using maximum automation, it is possible to complete a full game on a small world in only a few hours. Multiplayer games can also be sped up in the same fashion, and a turn timer can be used to keep players from taking super long turns causing everyone else to wait. However, when playing with experienced players who want the detailed level of manual control, turns can still take a fair bit of time and you often find yourself staring at the “Waiting for other players to move”message and yelling “Will you PLEASE hurry the heck up?!?” 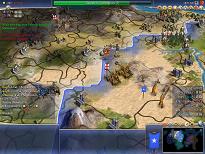 Combat between units has been simplified and players can see what the chances of winning battles are before attacking. There are still complaints from many players in the forums  “How the heck did spearmen beat my modern armor?!?” which has long been an issue in the series. One must remember, however, that the unit names are irrelevant. Unit experience, level, and health/strength are the only factors that matter (some units get special bonuses as well.) As a result, it’s quite possible that a warrior unit that you’ve had since the start of the game that has advanced in level and experience could have a better attack value than a green rifleman unit that has been seriously damaged from previous combat. It’s also important to remember that a combat rating of 6.0 vs 5.0 does not mean a guaranteed victory; it’s only a slightly more likely outcome.

One of the most interesting aspects of the game lies in the game engine. For the budding modders out there, Firaxis has built a very open and modifiable game engine. All units and many aspects of the game are modeled using XML, and the game graphics and gameplay itself are controlled through a series of Python scripts, all of which are provided with the game. Therefore it is entirely possible to change out everything within the game, build new units, new nations, new resources, new map elements, etc. Currently the only aspects of the game not modifiable is the AI system (which was written in C and C++), however, Firaxis is reportedly working on releasing a mod system to allow coders to modify the AI code as well. This feature should be available in the January-February ’06 timeframe.

All around, Civilization 4 is an excellent game and lives up to its forefathers. Gameplay is refined, detailed, and interesting. Be prepared because this game can quickly suck you in. Old-time Civ players like myself are well aware of the “adjust one more turn” dangers. You’ll find yourself starting a game at 9pm, looking up at the clock at midnight and saying “Oh &%$#! I need to get to bed! Just one more turn.” The next thing you know its 4am, and you’re in for a LONG day at work/school. Thankfully the developers have finally added a real-time clock and an alarm feature in the game to help keep you from burning the midnight oil repeatedly. (THANK YOU!!!!!)