Our second installment of “Flight Sim Gadgets” is the eMagin z800 3DVisor. This consumer 3D Virtual Reality helmet was recently tested by the geeks and was put through its paces both for Flight Simulator and other uses.

Virtual Reality doesn’t have quite the posh image that it did several years ago as users found that the technology wasn’t quite up to the hype. Part of the problem was the hardware that was available at the time for VR headsets was crude, heavy and had limited resolution. The geeks remember playing one VR game at Dave and Busters and being shackled with a helmet that felt like it weighed 40 lbs and it gave us a headache after 5 minutes of use. We’re glad to say that eMagina’s solution is MUCH MUCH better than those older units! 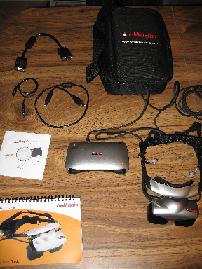 The z800 features a pair of Organic LED displays (1 per eye) running 800×600 resolution. The use of the new OLED technology means that the overall weight of the unit is surprisingly light at less than 8oz! Through the use of optics technology the display tricks the user into thinking that you’re looking at a 105 inch screen which helps with the immersion. For users with NVidia video cards, you can also turn on the built in shutter glass technology which will allow for realistic 3D in your games. Coupled with the display technology are built in headphones, a microphone and 6 degree of freedom head tracking. So, not only can you see in 3D, but you have stereo sound, and as you turn your head (in supported games) the display changes as well!

The unit comes in a nice custom fabric case to store and protect the unit. A base station unit hooks to your PC through the sound jacks (for the mic+headphones), USB (for power + head tracking), and VGA jack (for the video). A cable connects the base unit with the headset.

Ok, enough of the specs! Now let’s talk about our impressions! First off, this unit is very cool and definitely adds a lot to your gaming experience, even if only used for 2D displays. The light weight and adjustable optics do a good job of keeping down eye and neck strain which was common on older headset display units. The system works fine with eyeglasses, although bifocal users will have trouble. We were able to test the head tracking features using Battlefield 2142 and it works very well, tracking quite accurately, even in full 360 degree circles (something the TrackIR unit reviewed yesterday can’t do.) Unfortunately, the head tracking feature isn’t supported in Flight Simulator, so if you want to do head tracking, we suggest using the z800 in conjunction with a TrackIR 4 Pro.

The sound from the built in headphones was decent, but the headphones are of the ear bud style and hang down from the ear supports. Unfortunately the ear bud design isn’t really designed to be hung from above the ear and as a result we repeatedly had the buds fall out of our ears which were rather annoying. We would prefer to have seen more traditional style headphones used or a better support system for the buds to keep them from falling out.

The base unit provides both power on/off buttons, as well as a button to cycle the brightness control on the OLEDs (you can cycle between three different levels.) Our one complaint is that the unit comes with very a very short video and audio cable. This means that if you keep your PC on the floor, your control deck will also be on the floor (making it difficult to access the controls.)

The 3D shutter capability relies upon the NVidia drivers (and is not supported at all on ATI cards, so ATI users, sorry, but you can still use it as a 2D display) Unfortunately NVidia doesn’t keep the 3D drivers up to date with their normal video card drivers, so you either have to forgo the full 3D effect, or run older video card drivers as the version numbers of the 3D and Video card drivers must match. (This is not really eMagina’s fault – this is true with all 3D shutter glasses that use the NVidia system.)

The OLEDs worked very well, providing very good display quality, decently light weight, but after 30 minutes, you definitely feel the weight. Still this is a huge improvement over the older LCD models. The drivers were easy to get working and provide good help in setting up the head tracking features.

So, what do we think about the z800? Well, it all depends on what you want to use it for. We think it would be great for watching DVDs on an airplane or doing work without others being able to pry. In Flight Sim, the headset works really well (when used in conjunction with TrackIR for head tracking) for Virtual Cockpit mode. However, with the unit supporting only a 800×600 display, FSX users will have to hack their setup because FSX doesn’t normally allow this mode, and it can be difficult to view the various setup screens at that resolution.