Today the Geeks’ take a look at the fourth installment in the Battlefield series of games. Considered one of the best multiplayer FPS game series over the past 5 years, does this new futuristic version stack up to it’s predecessors? Pull up a chair and let’s find out. 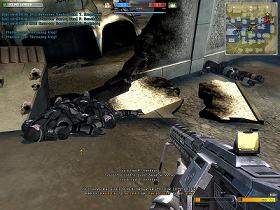 The Battlefield series began with 1942, obviously covering the World War II genre. Innovative in it’s use of squad based combat, relatively easy to control vehicles as a big part of the game, and the diverse character classes, BF 1942 brought in a new era of FPS gaming. A couple expansion packs later and the first sequel “Battlefield Vietnam” was released. Vietnam used the same game engine with new equipment, vehicles and terrain. In 1995 “Battlefield 2” came to the stage, covering the modern era with an all new game and graphics engine. The Geeks admit to playing many MANY hours of BF2 and have thoroughly enjoyed the fast paced action, the variety of equipment, and the squad based interaction. Although we found the expansion packs for BF2 disappointing, and the buggy nature of the game initially frustrating, overall the game was a lot of fun. Over the past year DICE has gone a long way towards fixing nearly all the problems with BF2.When 2142 was announced, we were both thrilled an apprehensive. Would the new version stack up? Built on top of the BF2 engine, would it be plagued by the same buggy nature, or would it be solid out of the door? The older versions all covered genres we’re all familiar with; would this futuristic version be compelling? 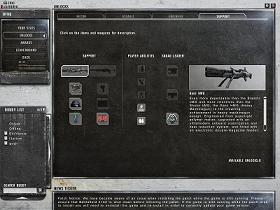 First some back story. 2142 takes place (obviously) in the future – a future marked by global warming causing a new ice age to come into being (yes, that is a plausible outcome of global warming!) The world has once again gone to war over the increasingly limited resources, limited livable land and control. The game features two major competitors (leaving room for the expansion packs to introduce others) – the European Union and the Pan Asian Coalition (which strangely speak Russian!) Also new to this iteration is a new game mode – Titan. Different than your standard capture and hold of flags, Titan Mode adds in a flying “Titan” (think flying aircraft carrier), and has quickly become the favorite of the Geeks, but more on that later.

Battlefield 2142 puts some twists on the familiar formula from it’s predecessors in several important ways. First, while previous versions were heavily centered around squad based play, there were always those players that insisted on not joining a squad (which makes it impossible for the commander to coordinate with them.) 2142 adds in the capability for squad leaders to drop a “squad beacon” that allows squad members to respawn at the beacon position, regardless of where the squad leader is or if they are alive. This can help keep the squad in a heavy fight with the other team by allowing the squad to respawn closer to the action. Second, as the squad achieves goals in the game, a meter tracks the squad’s achievements. If the meter fills up, all squad members are rewarded with a “field upgrade” that unlocks another piece of equipment that the squad members can use for that round. This can be a great way to try out upgraded equipment before having to permanently choose it. 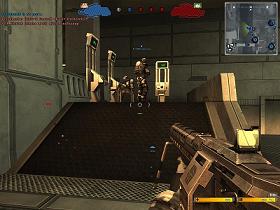 The other big change to the BF scheme is in the way unlocks are handled. In older versions you selected one of seven character classes (for instance, in BF2 you could be “Special Forces”, “Sniper”, “Assault”, “Engineer”, “Medic” Support” or “Anti Tank”.) These classes controlled what gear you had, and all players of the same class would have the exact same equipment, except for the upgraded guns that could be unlocked (and it’s always been questionable how much better those upgraded guns were.) In 2142, DICE has changed the formula to allow a bit more freedom and flexibility in character development. Now, rather than seven classes, there are four – “Recon” (which is a mix of Sniper and Special Forces) , “Assault” (which combines Assault and Medic), “Engineer” (combining Anti-Tank and Engineer) and finally Support. When you first start playing, you get the base gear consisting of a gun, pistol, and special equipment for that kit (for instance, assaulters get a medic pack). While these kits work and are interesting, what’s really slick is that now when you unlock new gear, you can apply it to get upgraded scopes, land mines, sentry drones, EMP grenades, etc which are kit specific. In the kits that are combinations of the older kits, you can pick and choose which path of the two base kits you wish to choose your upgrade from. For instance, it’s possible to be a Recon person armed with a sniper rifle, an upgraded scope and Demolition-packs (something that SF usually carries.) This allows a lot of flexibility in customizing your gear to the way you play. The Geeks have to say we really like this new method of kit management. Our only frustration is that when you join a new server your loadout preferences usually aren’t saved (hopefully DICE will fix this in the future.)

The new kit equipment ranges from a portable deployable shield barrier, to light shifting camo (think Predator style) to flying sentry drones, rocket launching gun add-ons, a portable AA missile launcher and land mines that actually are attracted to vehicles and will chase them. The new gear really opens up some interesting game play options. Add to that the new assortment of vehicles that range from hover tanks to battle walker mechs, to a cross between a jet and a helicopter and you can see this isn’t your father’s Battlefield (no, it’s actually your great great great grandkids!) 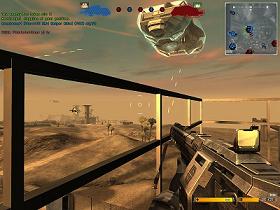 To be honest, the biggest change in BF2142 is probably the new Titan mode, and the Geeks absolutely love this game mode! As stated earlier, the Titans are large flying aircraft carrier-type mobile bases. In this mode, both teams battle to control a series of missile silos found on the ground. As the teams gain control of the silos, missiles are launched at the opposing team’s Titan, gradually reducing it’s shields. The idea here is to control enough of the silos to knock down the opposing team’s titan’s shields before your titan loses it’s shield. Once the shield goes down, the opposing team can board the titan, and that’s where the real fun begins! The titans contain four control panels, each one located down a hallway, and a central power core. If the opposing team can infiltrate the titan and destroy the four control panels, they can gain access to the power core and if they destroy that, the titan is destroyed. Alternatively, if the attacker can continue to control enough missile silos, the enemy titan’s hull can be destroyed. Usually by this time in the round, the game evolves into a combination of three goals – 1) defend your titan from boarding parties, 2) try to keep control of a majority of the missile silos so the other team’s titan takes more damage than yours, and 3) try to board and blow up the consoles and core of the enemy titan.

Why do we like Titan mode so much? A lot of the answer comes from that first goal – Titan defense is a BLAST! Anyone who remembers the opening scene of the original Star Wars movie where the Storm Troopers board Princess Leia’s ship has an idea of what Titan defense is like. The hallways are lined with little alcoves that the defenders can hide behind. If the defenders are properly dug in, the attackers must poke their heads around corners and be met with a hail of bullets. Let’s just say that the kill counts rack up pretty quickly in this mode and the bodies fall like trees! We have to admit the occasional evil cackle of joy at tearing up attackers as they repeatedly try to breach our defenses only to be met with defeat. 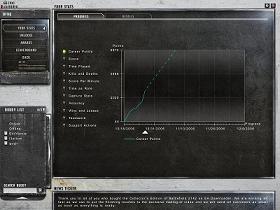 Unlike previous versions, leveling in 2142 happens relatively quickly (in < 12 hours total play time the Geeks have managed to rank repeatedly and open up 10 unlocks.) Special achievements are given ribbons, pins and badges and each of these gives a bonus to your round score as well which helps add to the advancement speed. BFHQ has also been improved to show you more information about your progress in the game both numerically and with nice charts. The server browser has been improved (although it still isn’t as good as what we’ve seen in other games), but two new features are highly appreciated. First, DICE has added a “Server History” that lets you see what servers you’ve played on recently (which is nice for finding that great server you played on last night.) The second is that now you can set up a buddy list and are shown which buddies are currently online and playing. You can now select a buddy and with 1 click try to join them on whatever server they’re on. This feature is very helpful when trying to coordinate playing with friends, but one gripe we have is that you can’t see if the server is full or even which server it is that they’re on, so it can sometimes be frustrating trying to join in. 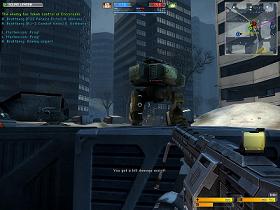 That leads us to the few bad points about Battlefield 2142. First off, like it’s predecessors, the game was released with a number of bugs. The Geeks purchased the game on release day directly from EA’s Downloader system (similar to Valve’s Steam electronic distribution system) and there was already a 1.01 patch! Even after the patch, servers are somewhat unstable, crashing often. We’ve also had issues with the game either crashing to desktop or dropping us off servers (apparently there is a problem with Punkbuster and the built in VOIP system also is causing some issues.) Finally, our biggest frustration is that there seem to be some problems with the titans that make it impossible for Squad Leaders to spawn on the titans if the titan is being moved by the commander. This bug is especially frustrating during late stages of the game when you’re desperately trying to mount a defense and you can’t get back onto the titan. There are also issues with dead bodies “falling” through the floor of the titans which makes it impossible for medics to revive them. Hopefully DICE is working on fixing these issues, and if Battlefield 2 is any indicator, then expect a number of patches over the coming year for 2142. Even with the problems, the game is quite playable and enjoyable, just be prepared for the occasional frustration.

In short, we find Battlefield 2142 to be a worthy and fun sequel and deserving of the Battlefield moniker. The improved character development, titan mode, new weapons and vehicles, and better squad play are all big pluses. While there are some bugs, we are sure that DICE and EA will resolve them and make this already great game even better. Our only hope is that EA doesn’t try to nickel and dime us to death with booster packs. Either way, see you on the battlefield!